Now that the drive wheel is installed, it needs a power source.  I’ve chosen to go with an electric motor for my mil.  I shared my reasons for this choice over an engine in the introduction but the main reasons are cost and ease. 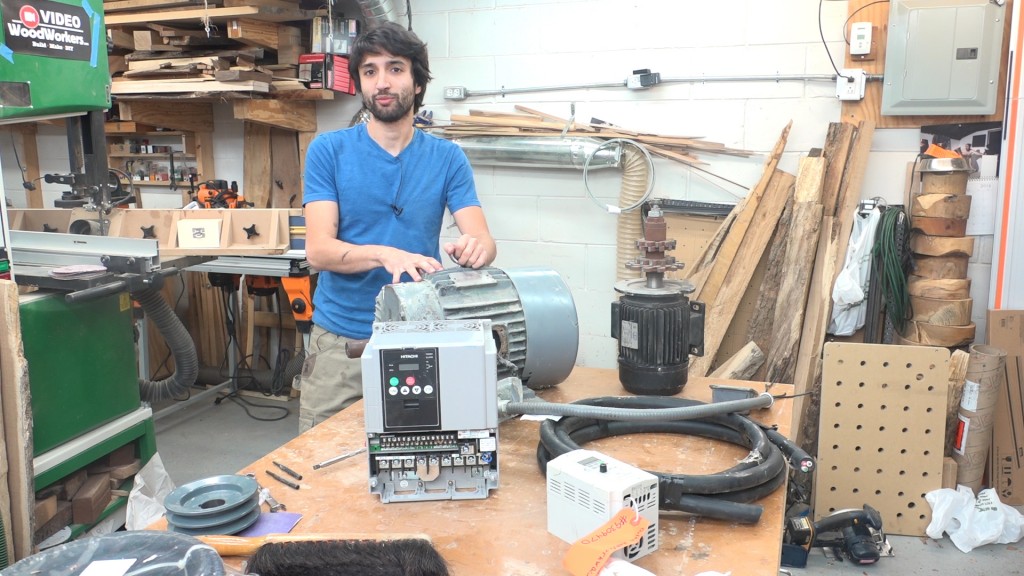 The drive motor is a 10hp GE 3 phase motor which I will be running off of a 15hp Hitachi variable frequency drive (vfd) so I can run the motor on single phase power.  The vfd needs to be rated higher than the motor because I’ll only be putting single phase into it, derating it. 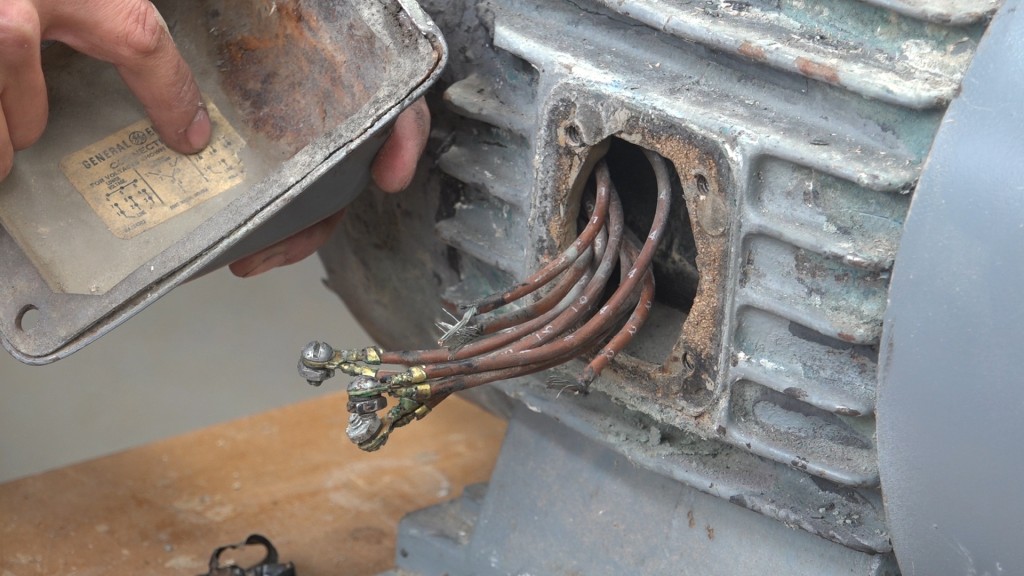 Opening up the wiring box, I could see that this motor was previously set up to run at high voltage (460v).  My home power system is 220v so I’ll need to rewire the motor to accept that voltage.  This is easy to do.  There is a diagram on the box cover and all the motor wires are labeled. 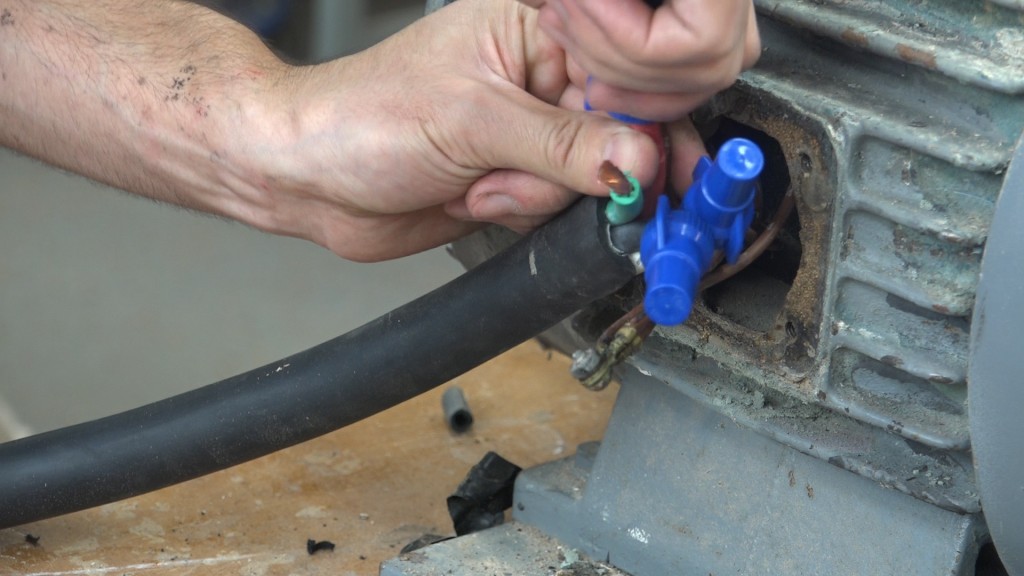 Once the motor wires were configured correctly I could attach the wires that would connect the motor to the vfd.  Since this is 3 phase, there are 3 hot leads plus the ground.  Since I’m just temporary hooking this up to verify it all works, I made these connections quickly with some large wire nuts. 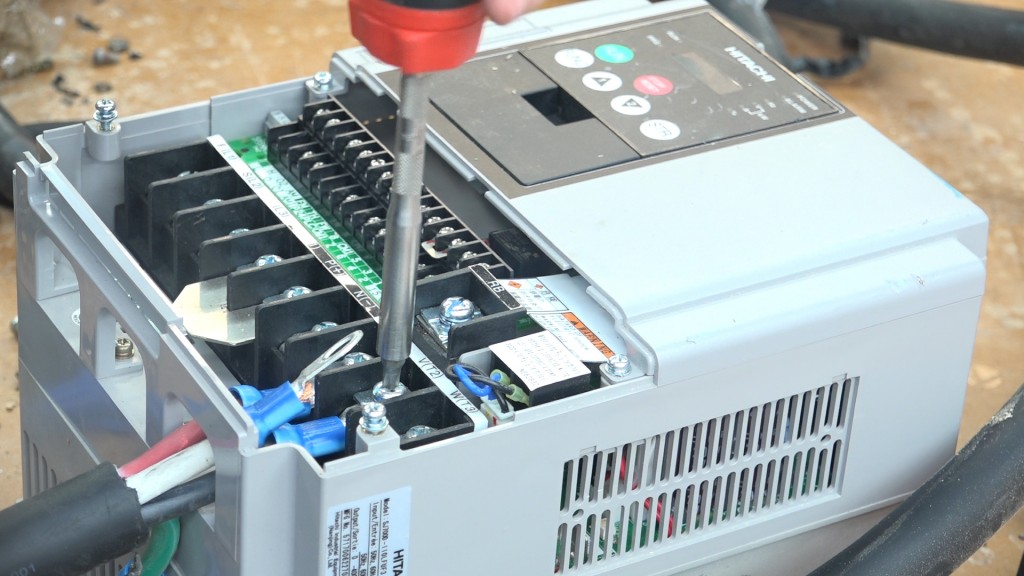 On the other end I installed some crimp on ring connectors and placed the wires under the appropriate terminals on the vfd.  The line in goes on the other side of the vfd and since those connections were temporary, I just put the wires directly under the terminals.  I’ll be putting a pig tail onto the input with a plug so I can easily hook this all up when I want to use the mill. 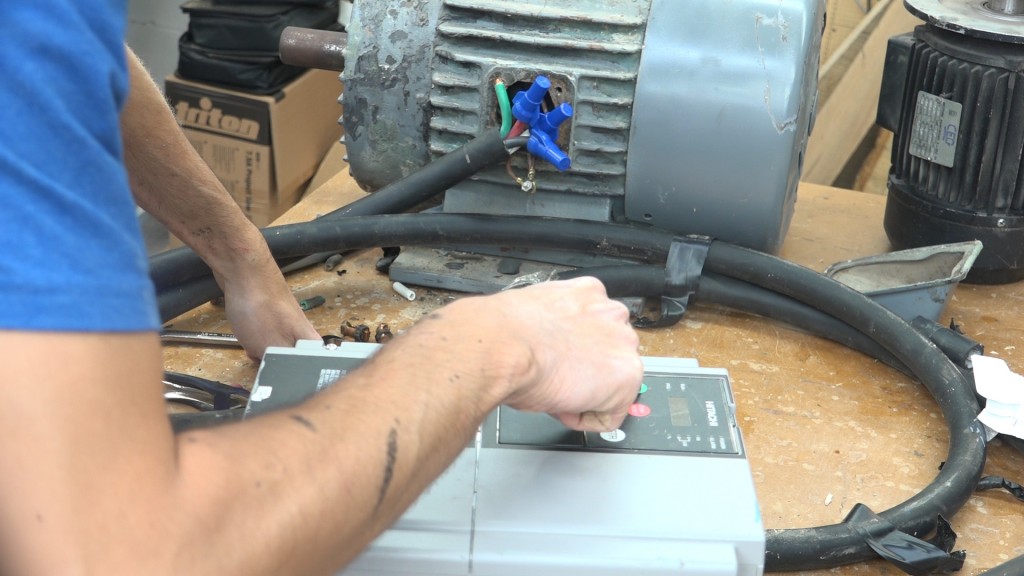 I put the cover back on and plugged it in. and nothing. 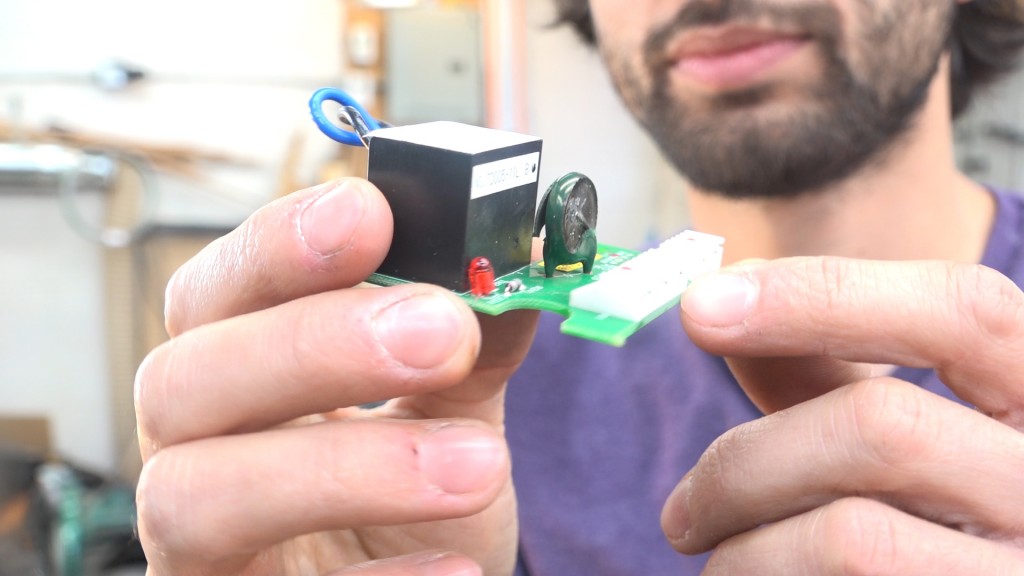 So here’s where things got frustrating.  I spent a lot of time trying to figure out why the vfd wasn’t coming on and when it did, figuring out how to get the vfd to turn the motor on.  So first I plugged the vfd in and nothing seemed to be happening.  The power led on the controller wasn’t lit and the controller wasn’t on (neither were the cooling fans).  I opened the cover and used a tester to confirm that there was power coming into the vfd at the input terminals (in case my power cord wasn’t supplying power) and that was good.  At this time I noticed a power led on one of the boards was lit so I knew it was getting power but wasn’t starting up.  At this point I got a little more investigative and decided to start taking the vfd apart to see if maybe something was damaged.  The board with the power led was partially covered and was the first thing I went looking at.  I immediately noticed that one of the components on the board was blown.  Luckily, I had accidentally purchased an incorrect vfd on eBay (one for 460v) and hadn’t gotten around to either returning it or more likely posting it for sale since it was so long ago.  That vfd had the same board in it so I was able to swap the boards.  Now when I plugged it in, the power led on the controller was flashing.  I was sort of happy since this showed some progress however, the vfd documentation didn’t state what a flashing power led meant.  After some digging, I found out that it meant that the vfd wasn’t receiving the correct input power.  The vfd was expecting to see line voltage on all three input terminals.  Since I was supplying it with single phase power, I had two of the terminals powered leaving one un powered.  Easy fix for this though: I just jumped one of the hot leads to the extra terminal.  Now the vfd detected voltage on all three lines and came on.  I was super thrilled.  Now came the process of figuring out the vdd’s control and programming system.  With the manual as a guide,  I reset the vfd to factory defaults and went though the set up process which tells the vfd about the motor it is connected to.  Now lastly was figuring out how to get the vfd to make the motor spin.  It took me a long time to find the area in the controller where you could change the output frequency (F001) since the manual expected the vfd to have a potentiometer on the front for changing this setting.  Once I found that area, I could use the arrows on the controller to increase the output frequency which causes the motor to spin.

Success.  This all works now so lets get the mill ready for the motor. 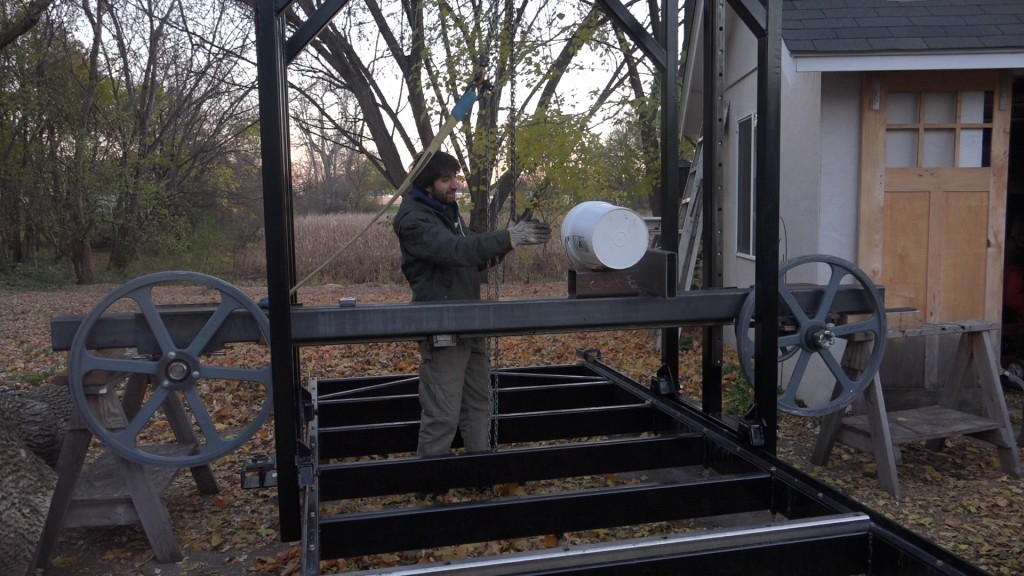 First I needed to figure out where to put the motor.  A 5 gallon bucket makes a great stand in since it is almost exactly the same size as the motor.  The shaft of the motor needs to be inline with the back side of the drive shaft which means the motor will extend into the blade area if just mounted directly to the beam.  So I’ll need to build a platform to raise the motor high enough to clear the beam. 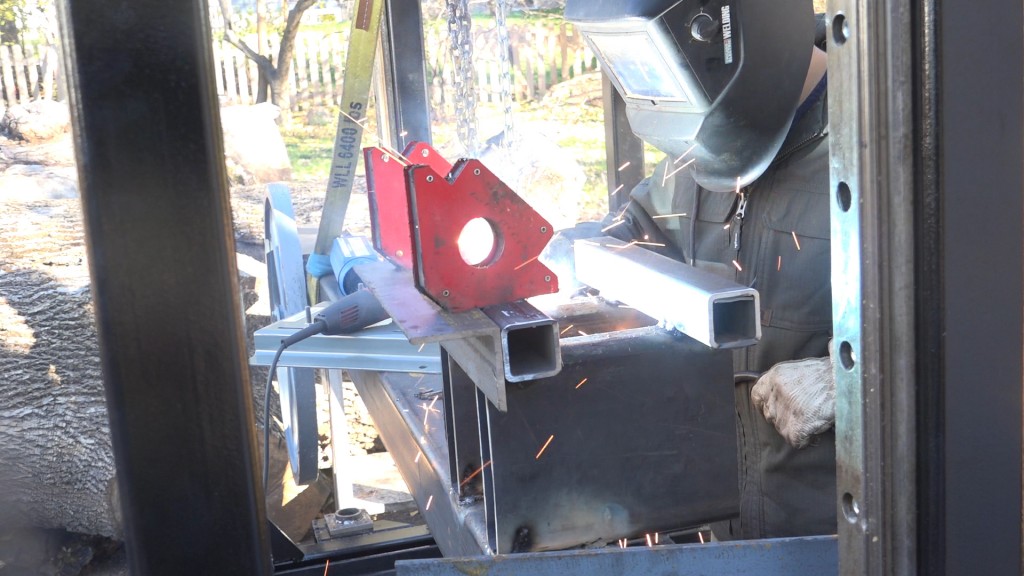 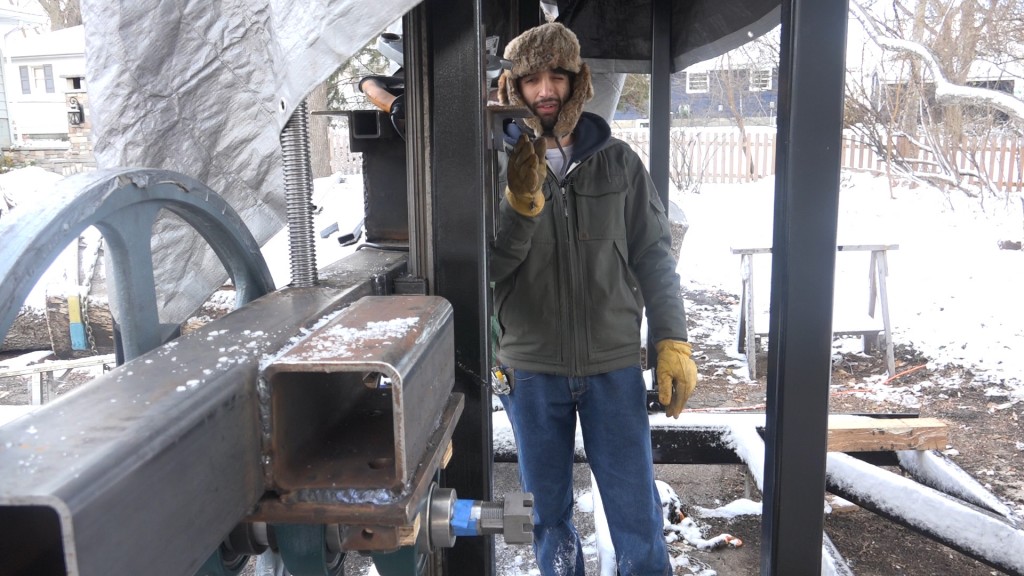 In my excitement, I added a piece of angle to the back side but that wasn’t needed for the motor mount and actually will get in the way of the belt so that needed to be removed.  I used my circular saw to cut it leaving the vertical leg of the angle. 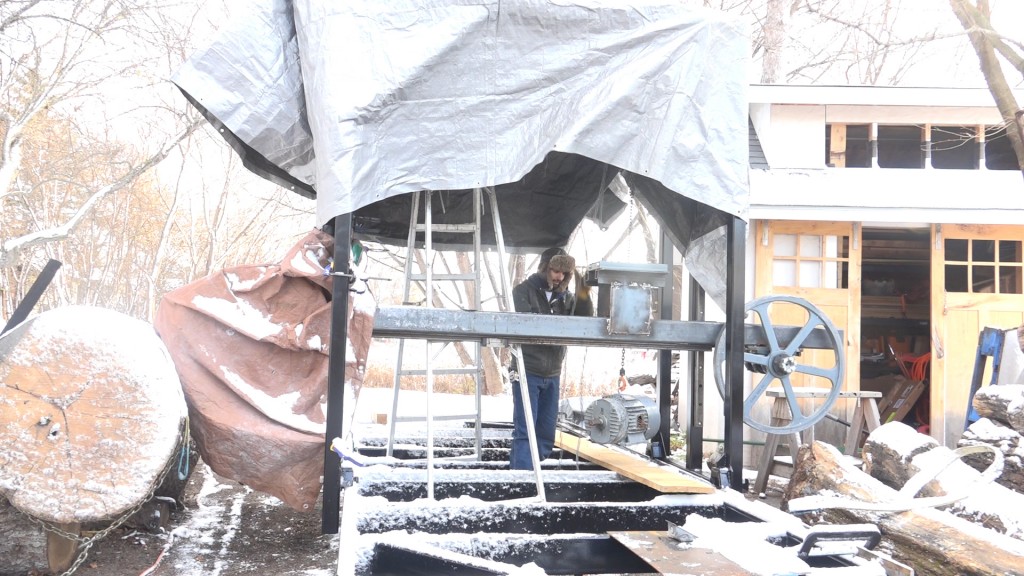 Now the motor can be raised up onto the motor mount on the platform. 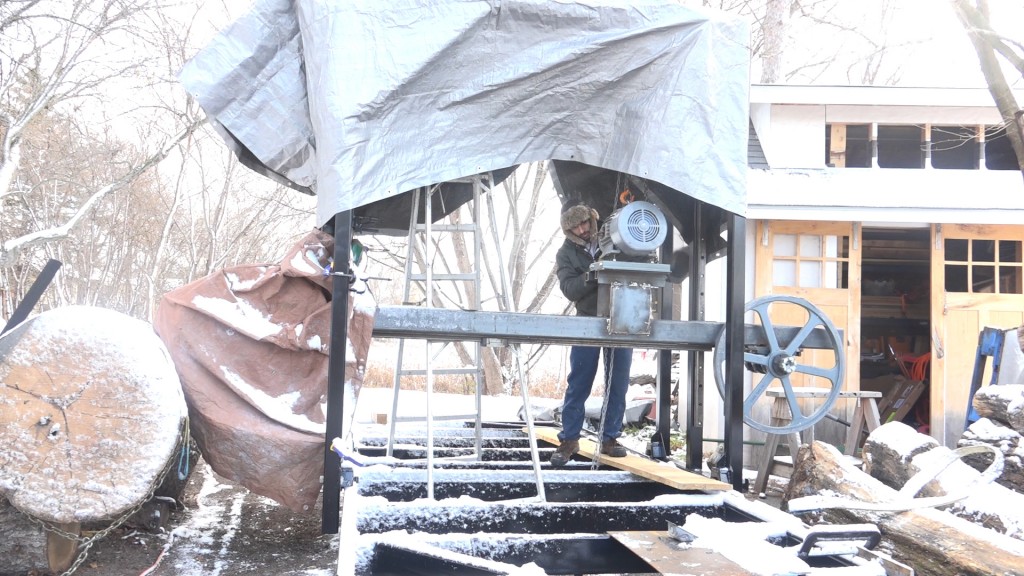 I wanted to get the motor onto the mount so I could get it in the correct location front to back before marking the holes for bolting the motor mount to the platform. 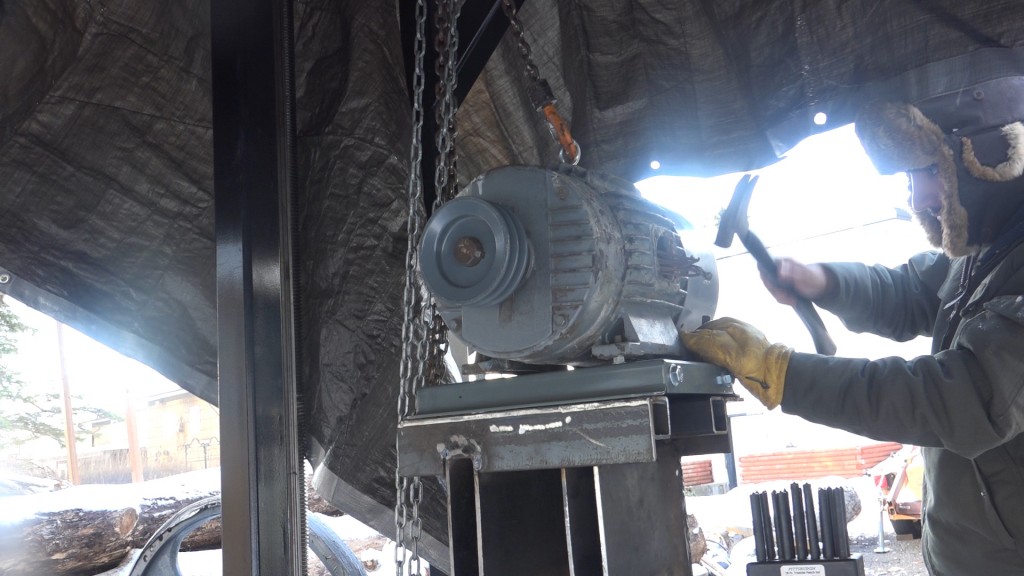 The motor shaft was in the correct position front to back and I also check to make sure the pulleys were roughly aligned and not twisted compared to one another.  I then transferred the holes with a transfer punch. 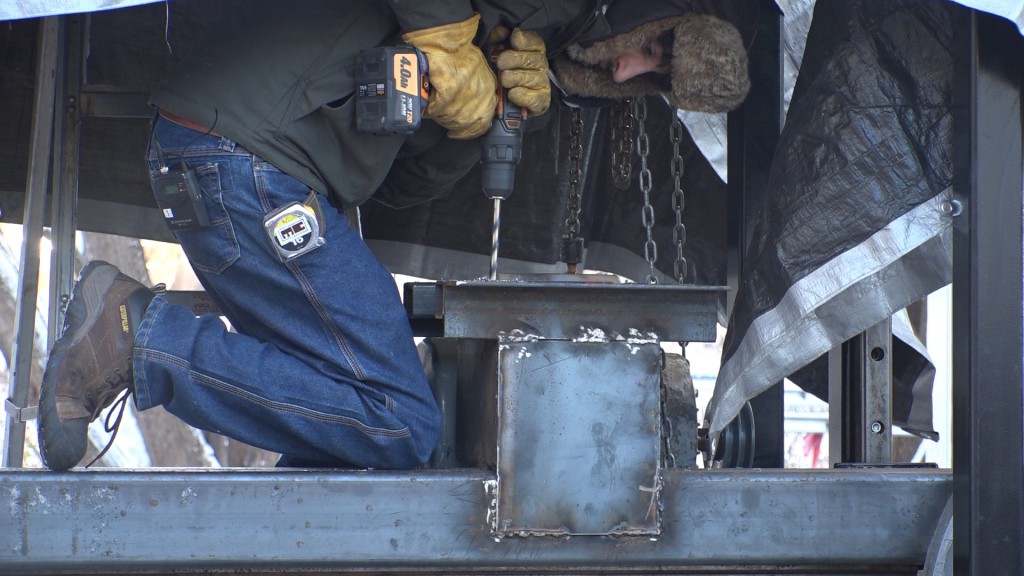 I drilled the mounting holes with my cordless drill. 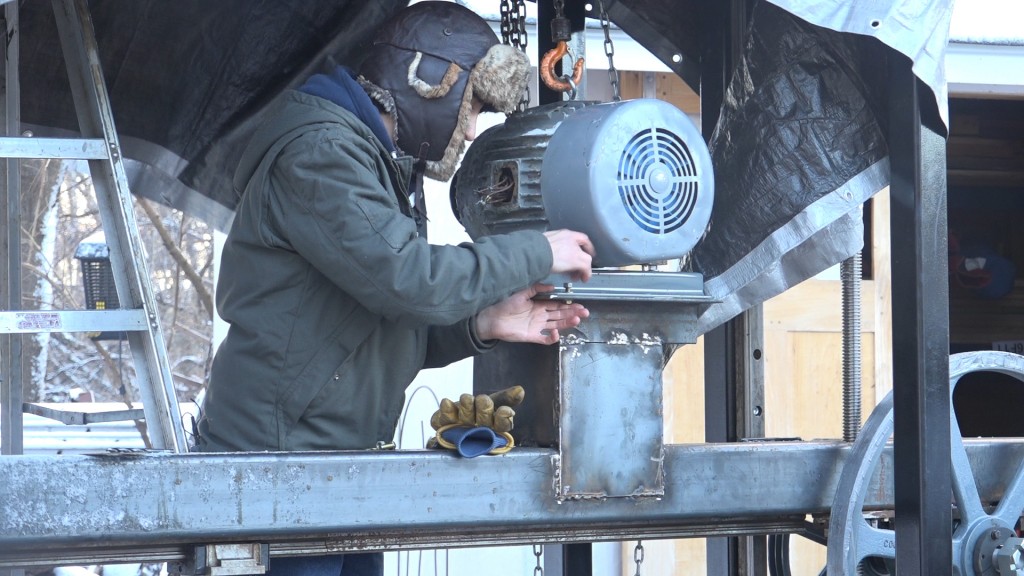 Then I could put the motor back into place and bolt the motor mount to the platform. 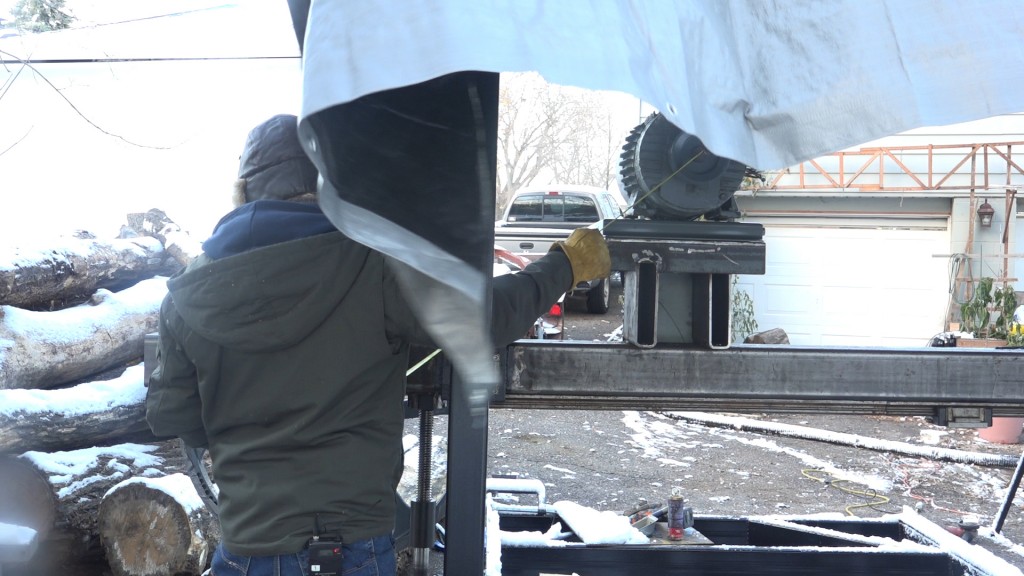 Lastly I can measure the distance between the centers of the shafts so I can calculate the length of the belt I’ll need.

There are many belt length calculators available online.  Here is the one that I used: http://www.calculatoredge.com/mech/vbelt%20length.htm 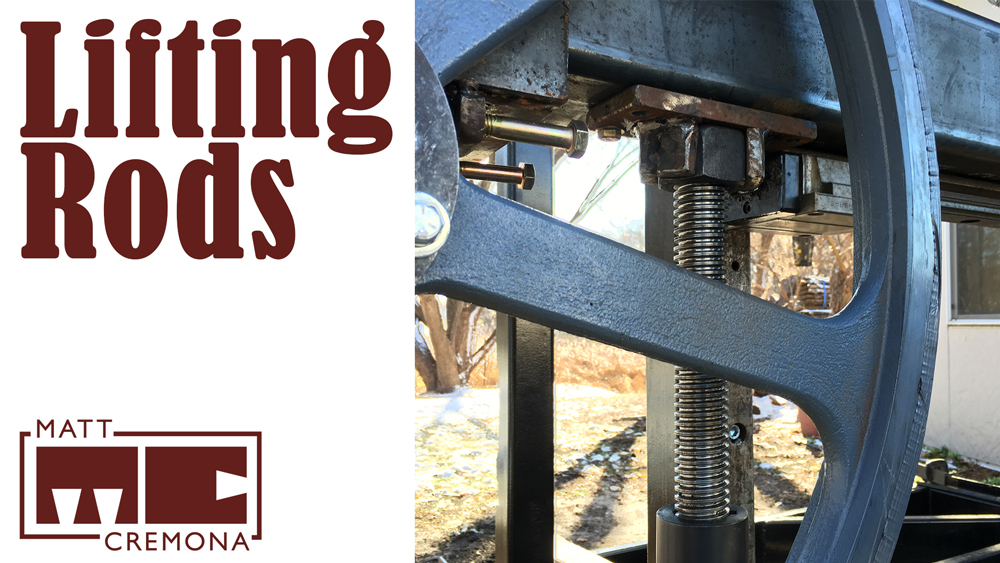 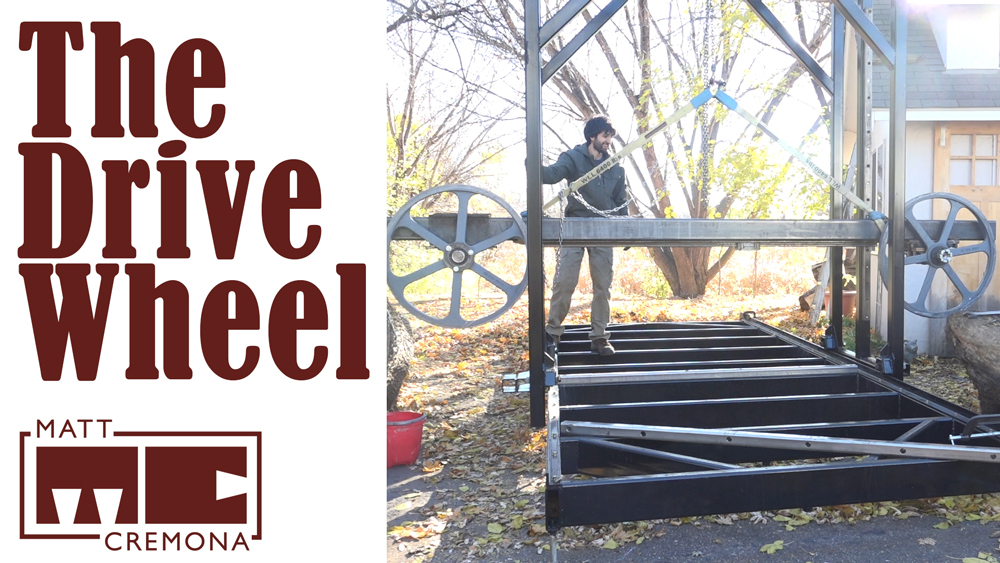