Making a Batch of Charcuterie Boards from Firewood

About a year ago, I made a few serving boards from some sawmill scraps that were in my firewood pile. This year I wanted to make a bunch more for gifts and to switch things up, I decided the focus of this video should be on the batching process vs the prototyping process that we went through last time. This video was inspired by a viewer who asked how long each board would take to make so I’ll be tracking the time spent at each step and dividing the total time by the number of finished boards. 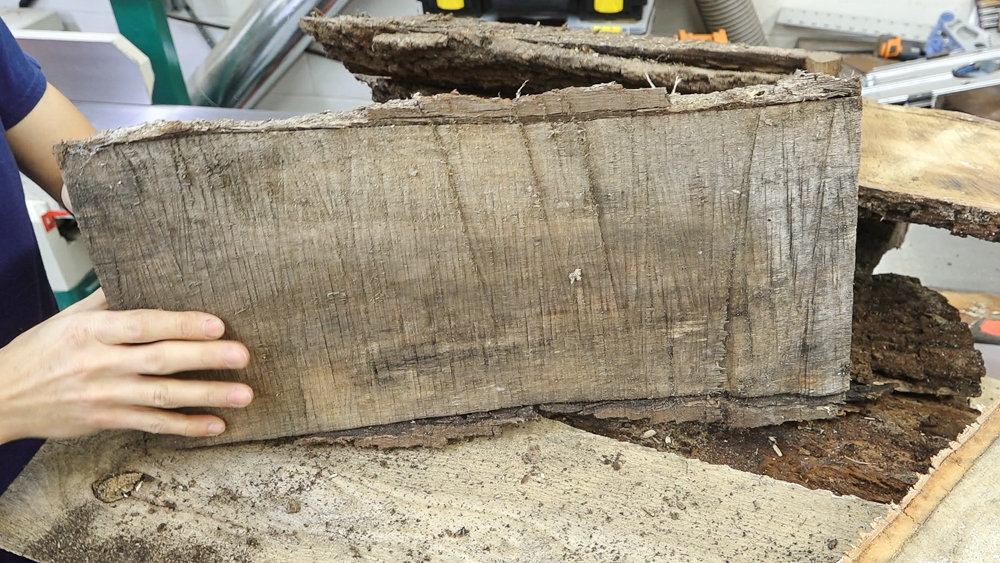 I raided the firewood rack for a wheel barrow full of decent pieces for this batch of boards.  One of the racks was getting towards the bottom and I found a bunch of the walnut  offcuts from my first chainsaw mill video  – a video I did in the summer of 2014.  At this point right off the rack they don’t look like much but they have potential. 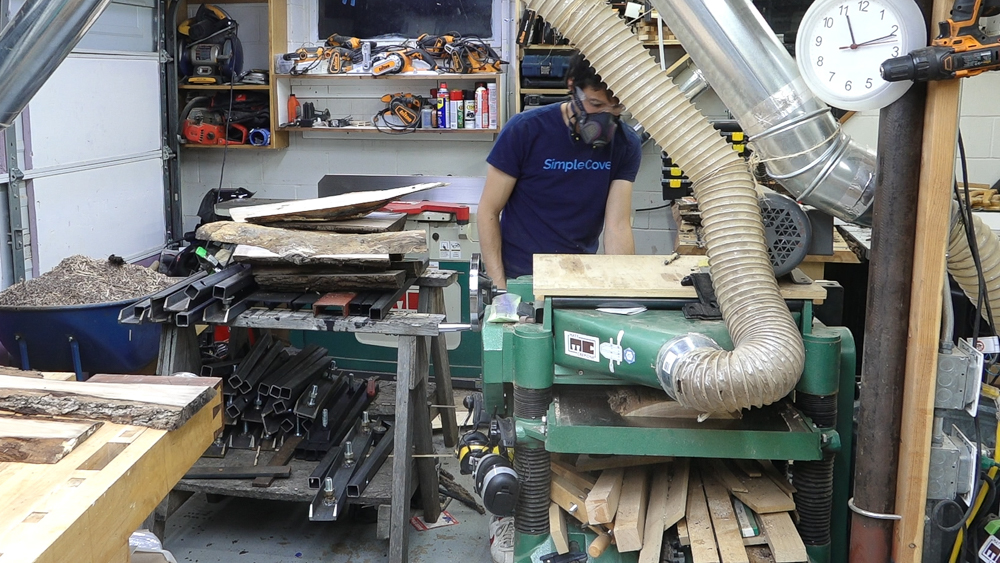 Since these were just sitting on the rack, they’re still too wet to use in this project so they’ll need to sit to dry for a bit.  To make that drying process quicker, I’ll run through and rough mill each piece.  They’ll be flattened on the jointer and run through the planer to remove the majority of the waste.  Many of these are tapered or have a variable thickness.  This milling process makes them a uniform thickness. 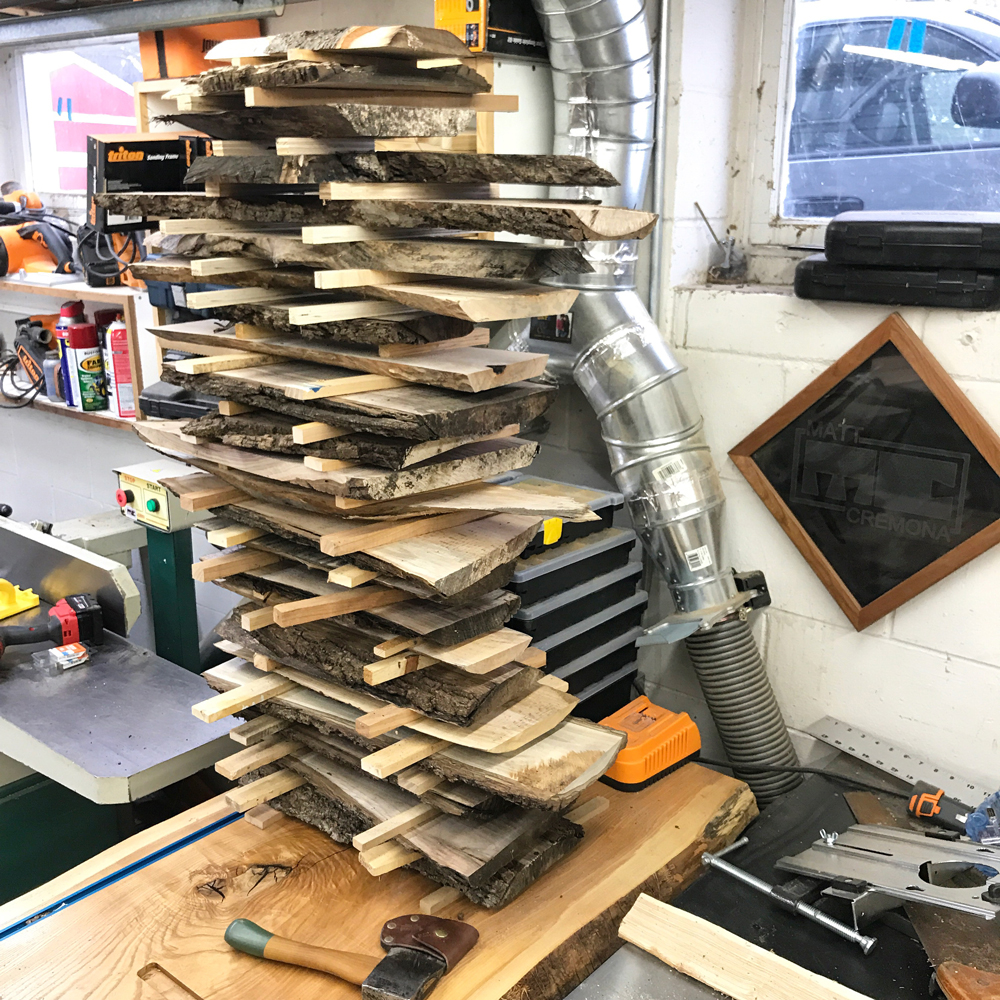 I stacked the boards with stickers on my outfeed table and left them there for about 3 weeks. 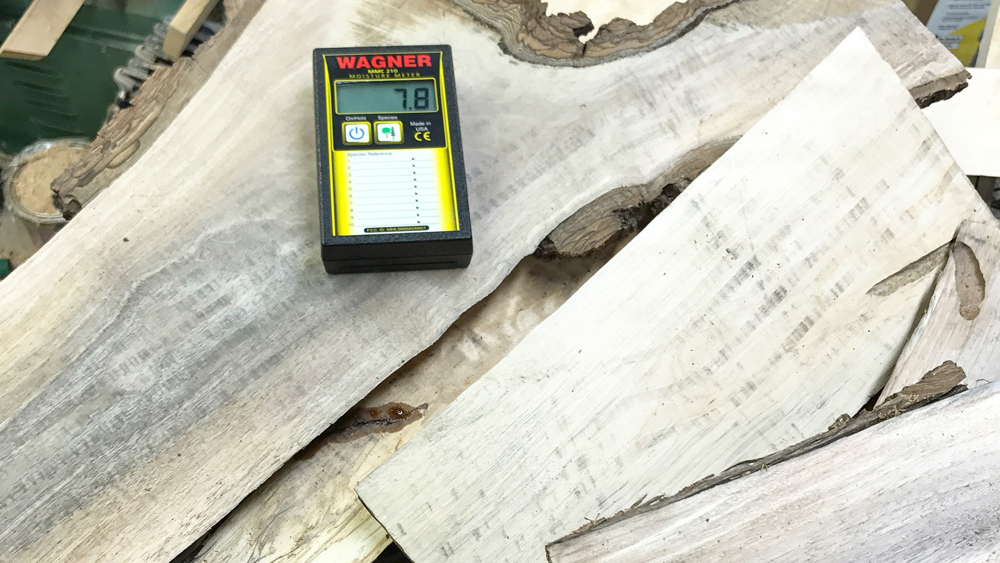 I checked them with my moisture meter before getting started and they were reading below 8% which is right where they need to be and is a big drop from about 16% when I brought them in.  I spread them out and filled any defects with epoxy the day before I was planning to start on the batch of boards. 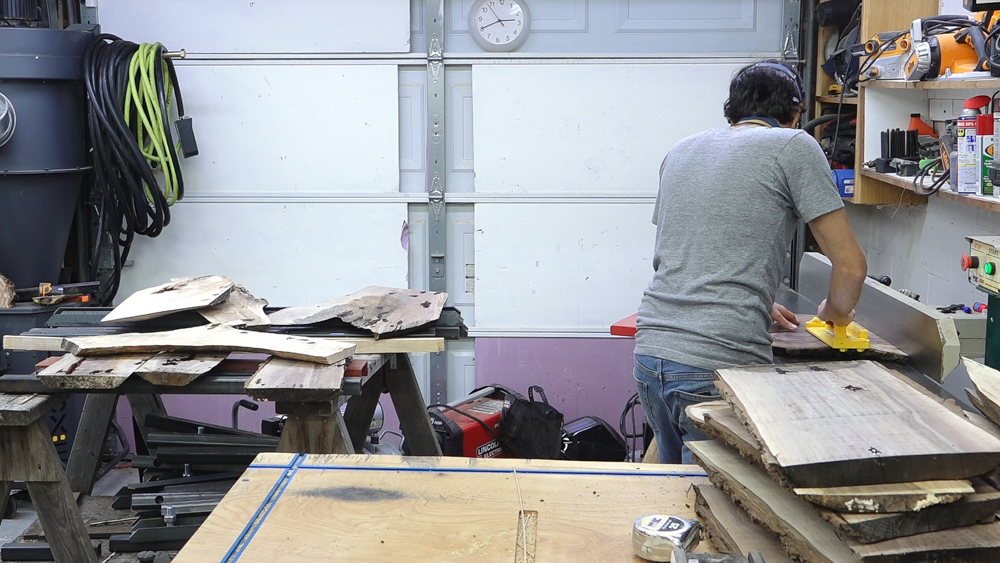 To get started, the first step is the same as before: the boards are run over the jointer to bring them back into flat and then run though the planer.  You could take these all to the same thickness but I opted to leave them at variable thicknesses.  I just stopped planing when the board was all cleaned up.  Most of the boards ended up around 3/4″ thick, some dropped closer to 1/2″, and a few were closer to 1″ thick. 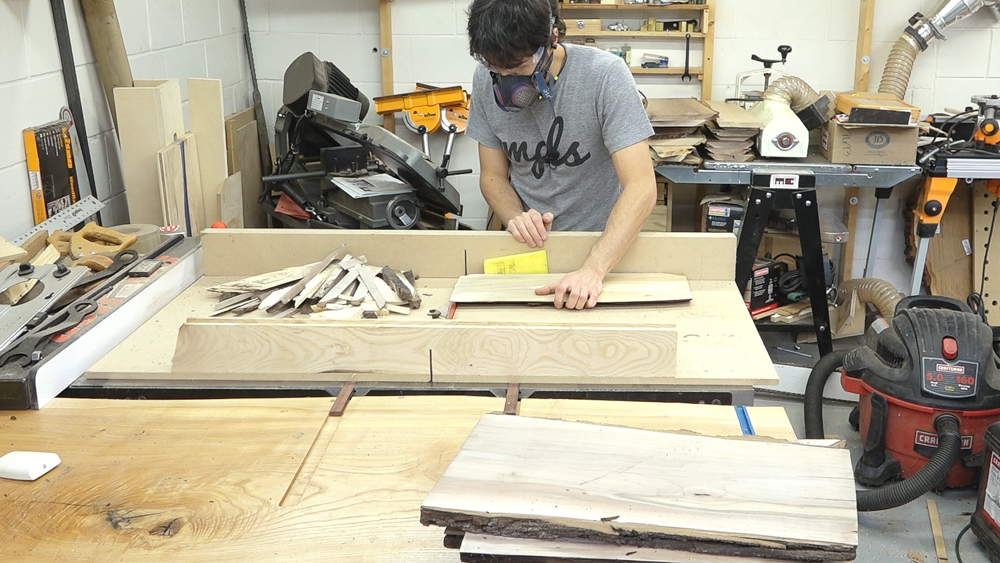 Next each board gets cross cut to remove any checking and just clean up the ends.  I really like the variable odd angles on the ends from when I broke these down into firewood.  To preserve that, I used a felling wedge as a shim to angle each cut to match whatever angle was previously cut onto the ends of each board. 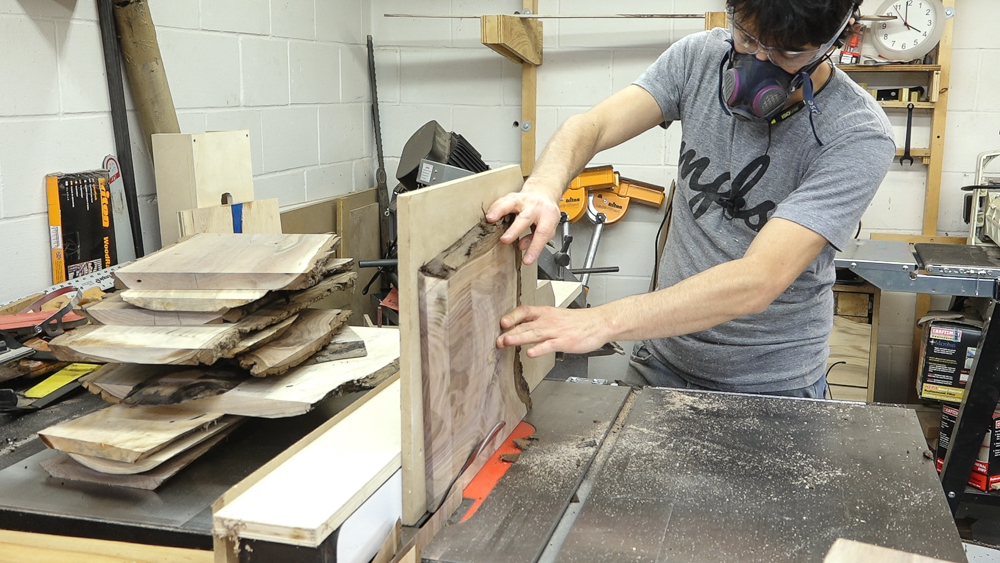 Next a bevel is cut on the ends to act as a handle for picking the boards up off the table.  The blade is tipped to 20 degrees and a tall auxiliary fence is placed 3/8″ away from the blade. Running the boards vertically cuts a 70 degree bevel. 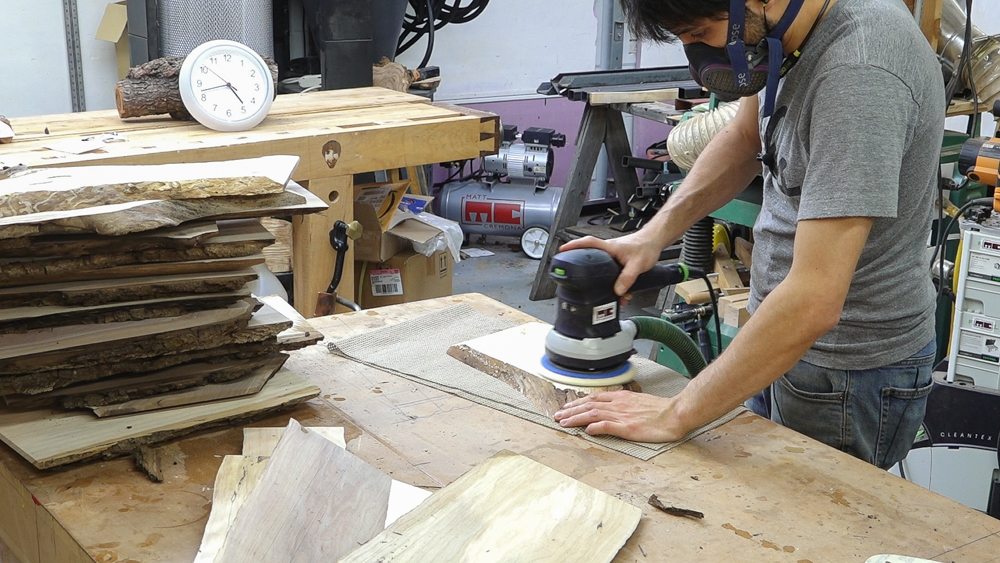 At this point all the cutting is done and it’s just finish prep and finishing from here.  I start by sanding the faces of the boards to 120 grit. 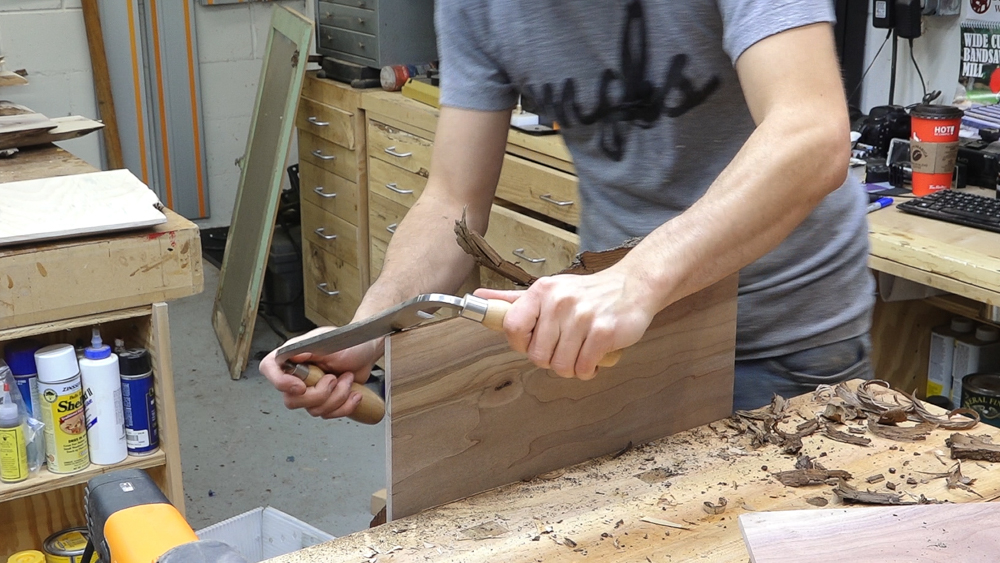 Next I’ll address any live edges that need work.  Many had their bark fall off already but the walnut boards were still attached.  On any board where the bark felt firmly affixed to the wood, I just removed the furrowed outer bark and left the patterned inner bark.  I used a draw knife to strip away the waste and then used a sander to blend and smooth the edge. 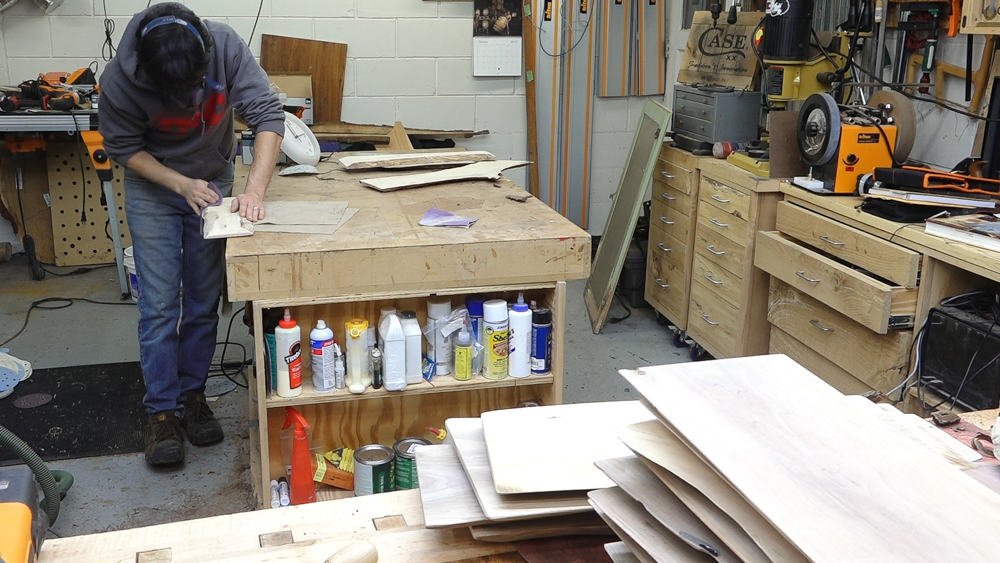 The last bit of surface prep is to sand the boards to 180 grit and break all the edges by hand.  At this step I’m paying particular attention to make sure the boards feel smooth and that there are no sharp edges or facets. 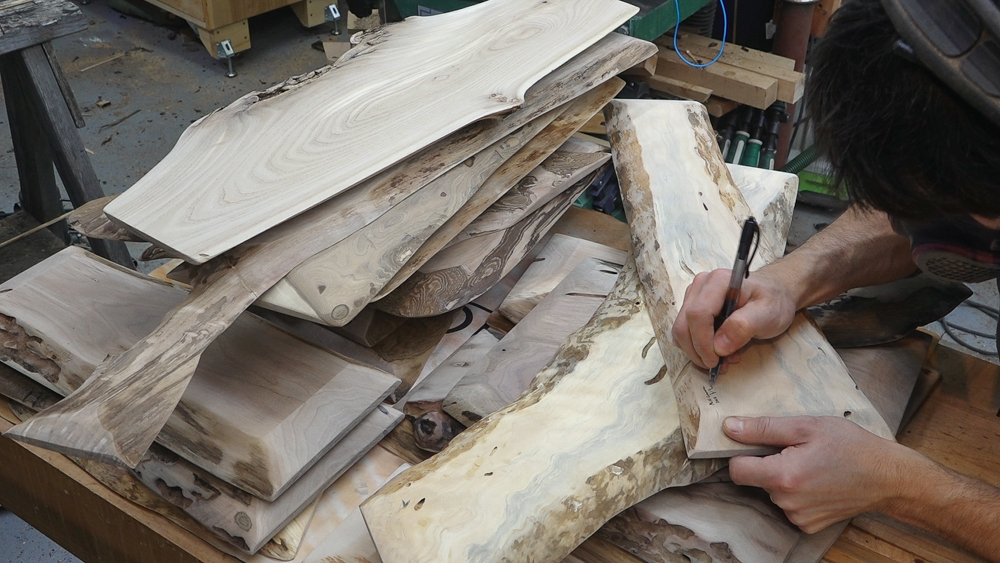 One last quick detail before finish is to sign and date all the boards. 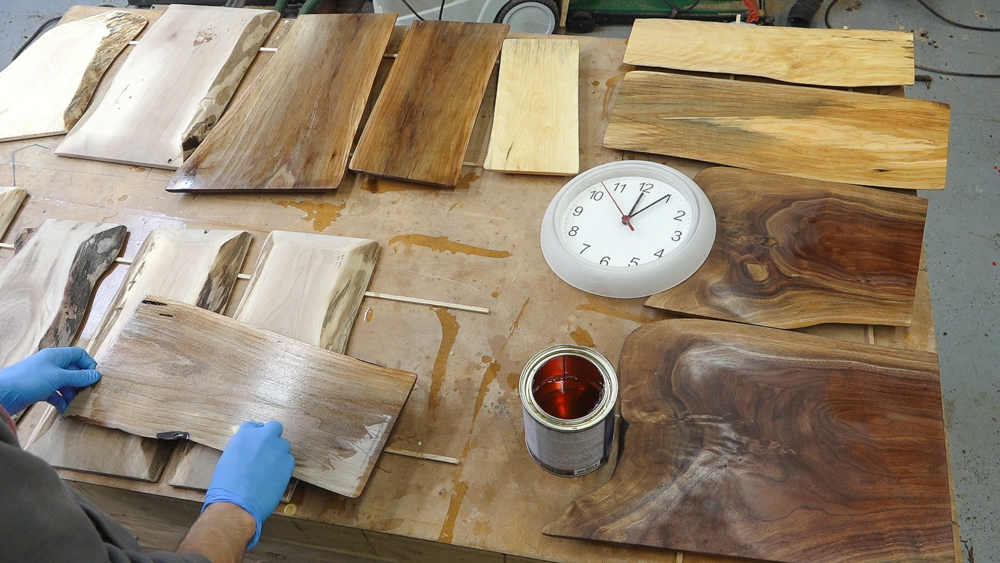 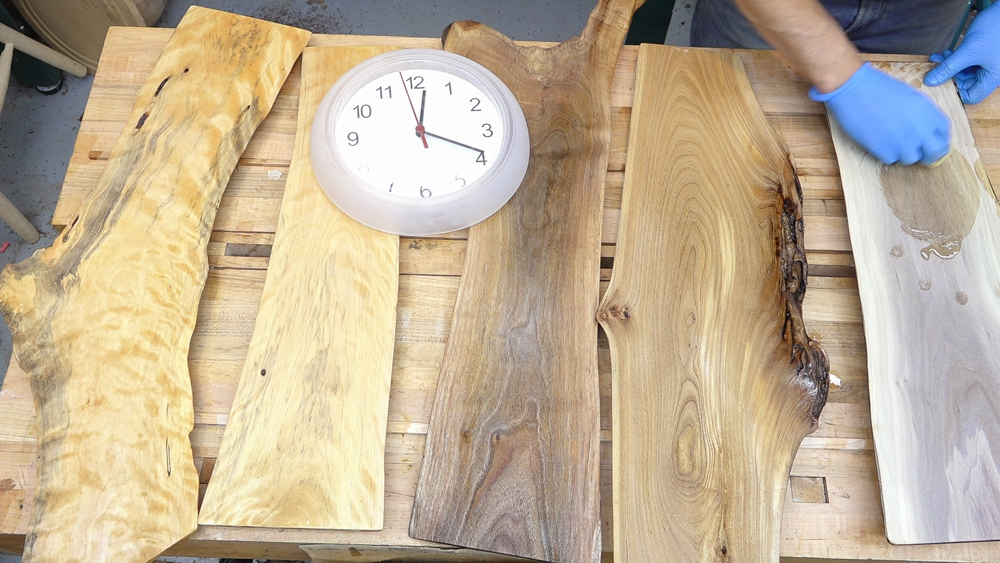 Many of these boards had some pretty incredible figure.  The birch for instance was crazy curly. 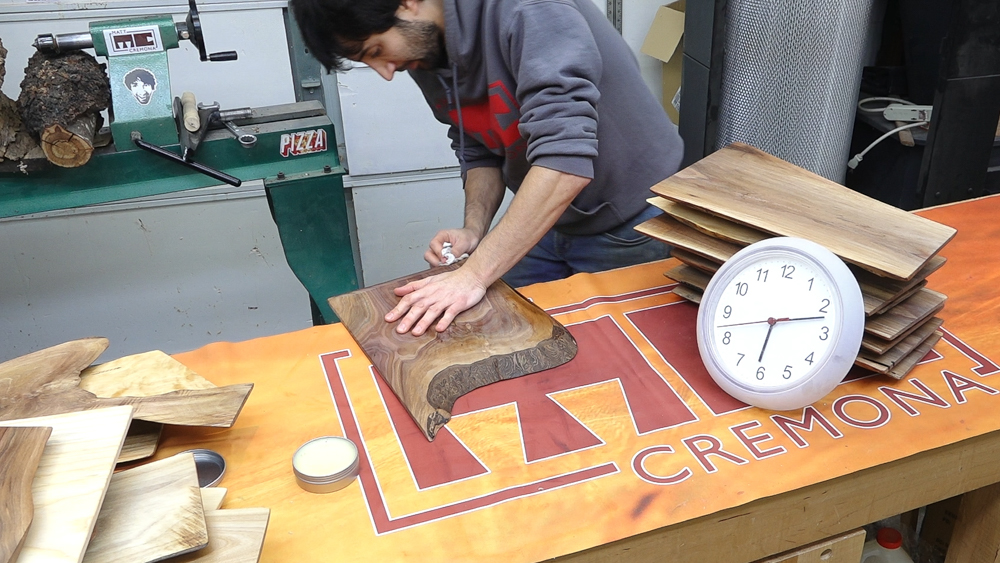 After the finish cures, I’ll give each board a coat of wax.  This will help even out the sheen of the boards and since it’s being buffed on, it will also smooth out any roughness in the finish. 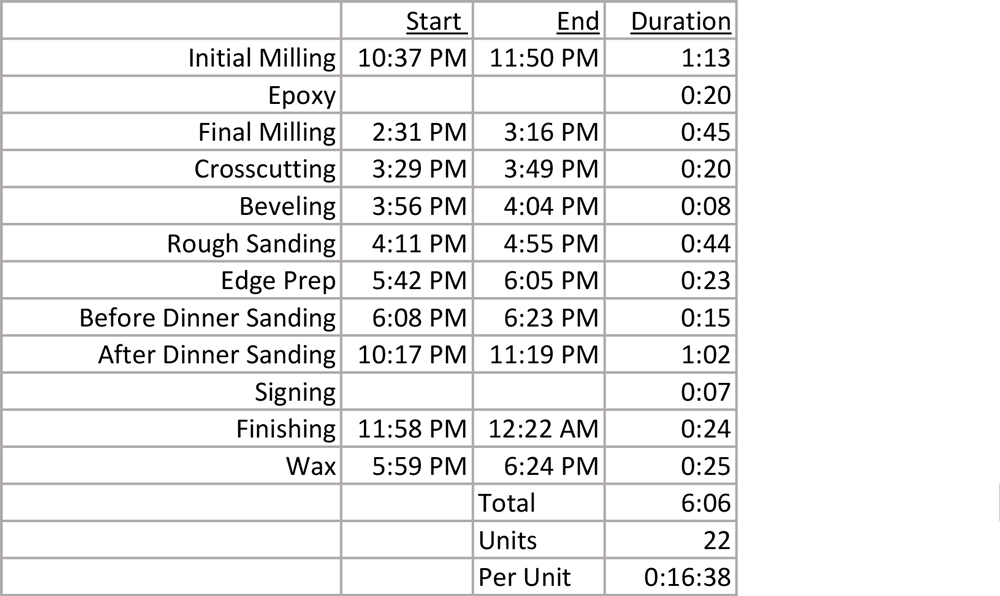 After tallying up all the time spent on the boards, I ended up with a per unit labor cost of almost 17 min. 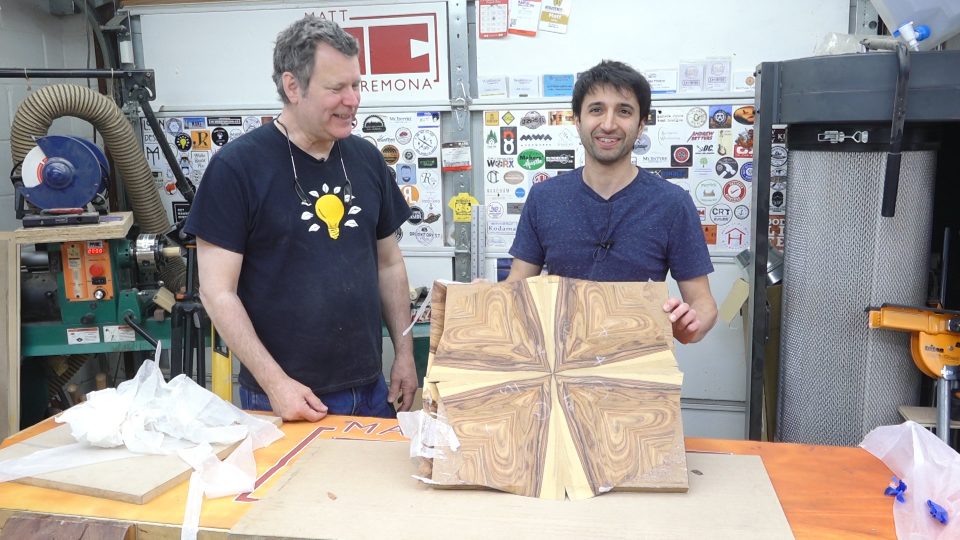 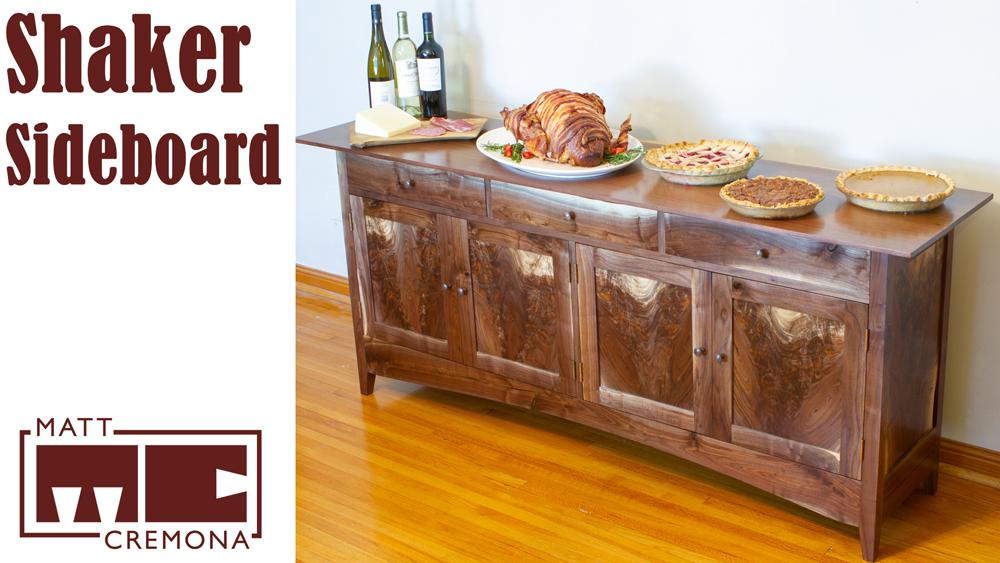