I’ve been meaning to upgrade my drill press for a while…. 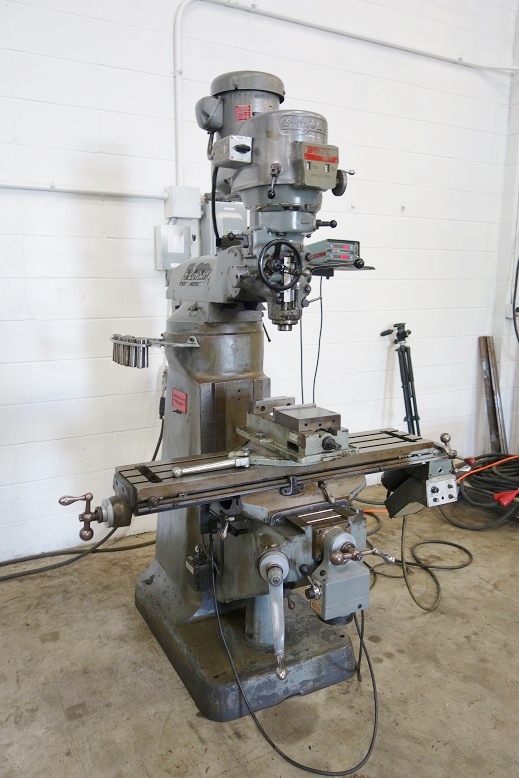 I found this mill at a local used machinery dealer which was just a couple miles down the road from me – about a 9 min drive door to door. I have to say, buying this mill was a really great experience from a customer perspective.  I worked with Jim on the purchase and he is super pleasant.  Jim’s assistant, Keith, showed me the machine and helped me load it.   Keith walked me through all the controls and functions on the machine. 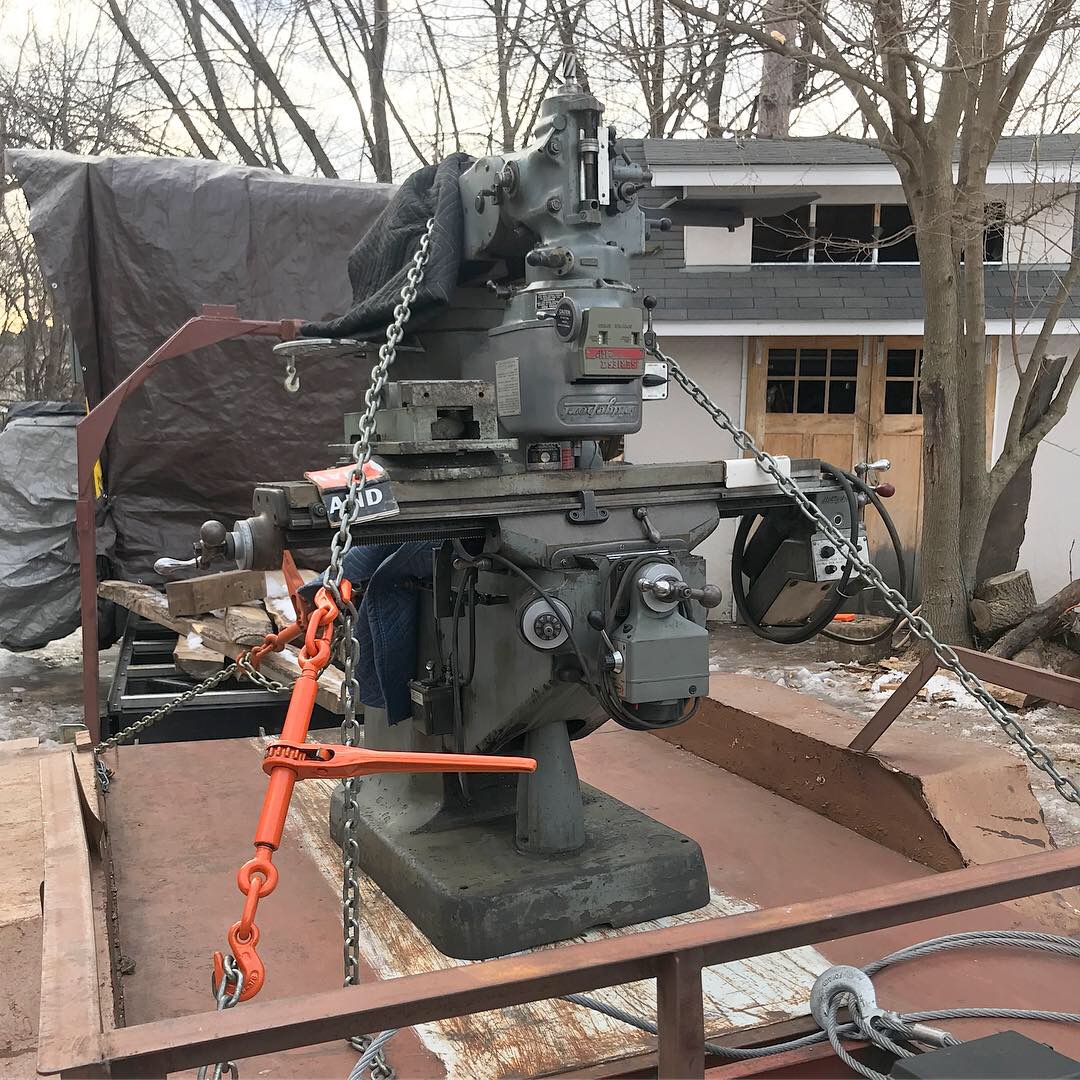 So when I originally decided to get a mill, at first I was looking for the less expensive belted head.  On those machines you need to change the belts to change the speed.  I figured that wouldn’t be such a big deal because since these machines are 3 phase, I would be powering it with a vfd so the vfd would provide me with variable speed so I wouldn’t need to change the belts very often. In the process of looking at that style of machine (I looked at 3 of those), I started thinking maybe the variable speed head would be better since they come with more powerful motors and having some extra power wouldn’t be a bad thing.  I also noticed that the variable speed machines tended to come with more of the accessories like powerfeed or digital readout.  Probably more importantly was the 1.5 and 2hp mills tended to be in better shape. 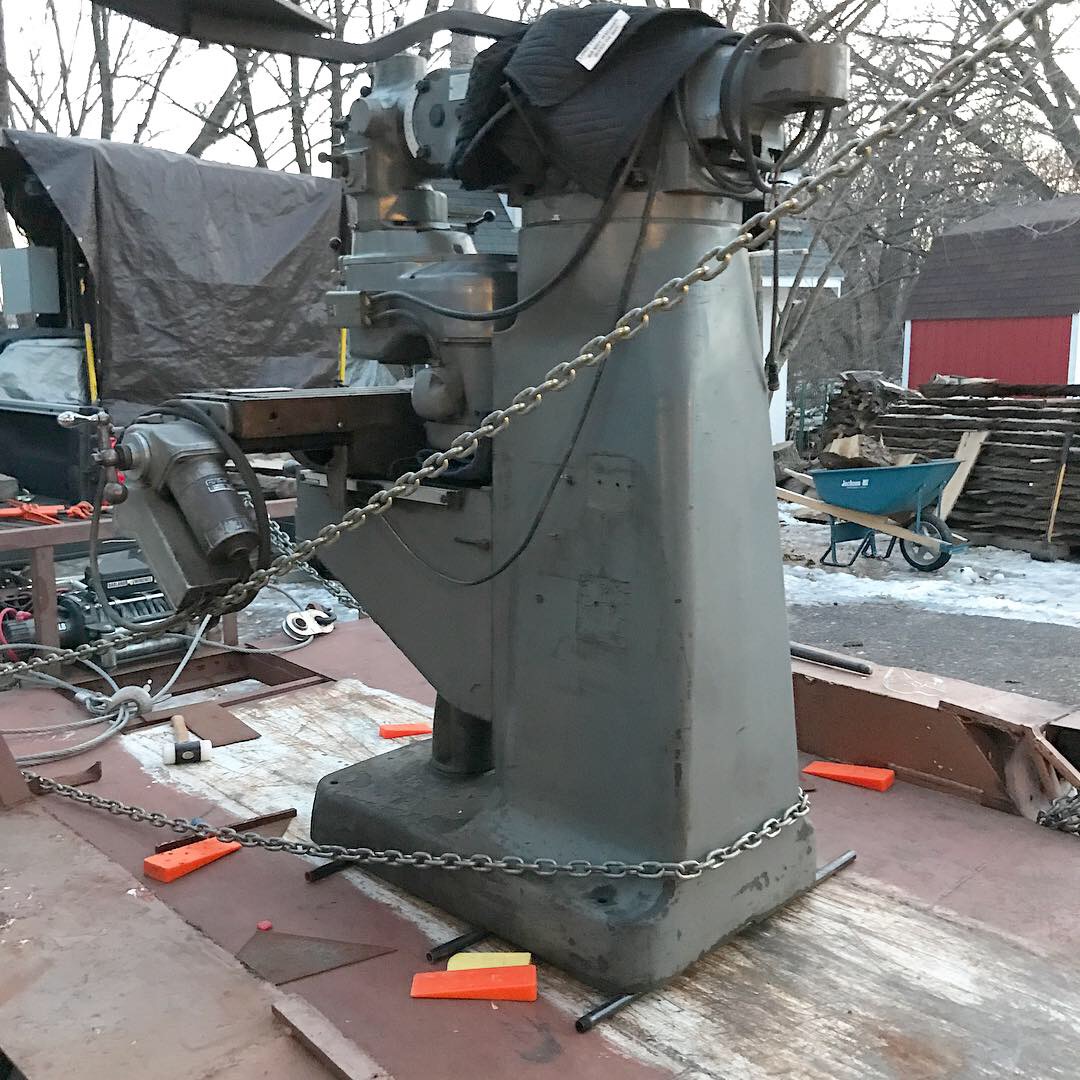 Unfortunately, the power feeds aren’t working.  Jim was telling me that there used to be an electrical box on the machine which they plugged the power feeds into.  The feeds are 110v but those outlets were 220v so a little over-voltage and they’re no longer working.  I did get a better price reflective of those feeds not working – about $1000 off but I wouldn’t have minded paying more to have working feeds.  This mill did come with a DRO but only has a scale for the y axis.  It also came with the vice, some tooling, and a setup kit. 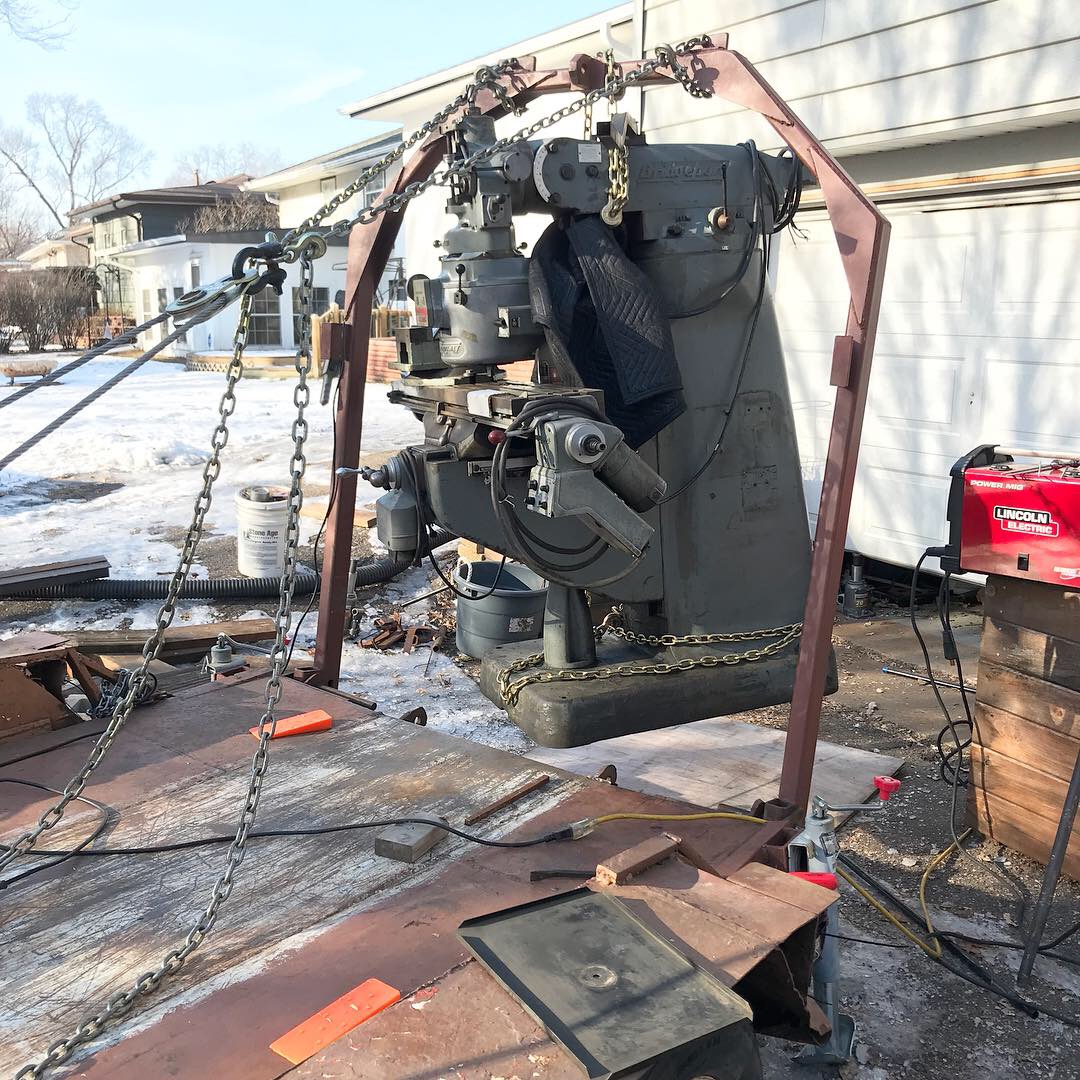 The overall wear on the machine looked good.  There was still flaking visible on the cross slide ways, knee, and table.  There weren’t any huge gouges in the table.  Backlash wasn’t horrible and the table ran smoothly to the extent of it’s travel with no play.  The spindle sounded good and the mill wasn’t missing any parts. – not that I need the best condition machine but I tried to approach this purchase with a buy once mentality.  I shouldn’t have to buy another mill again. 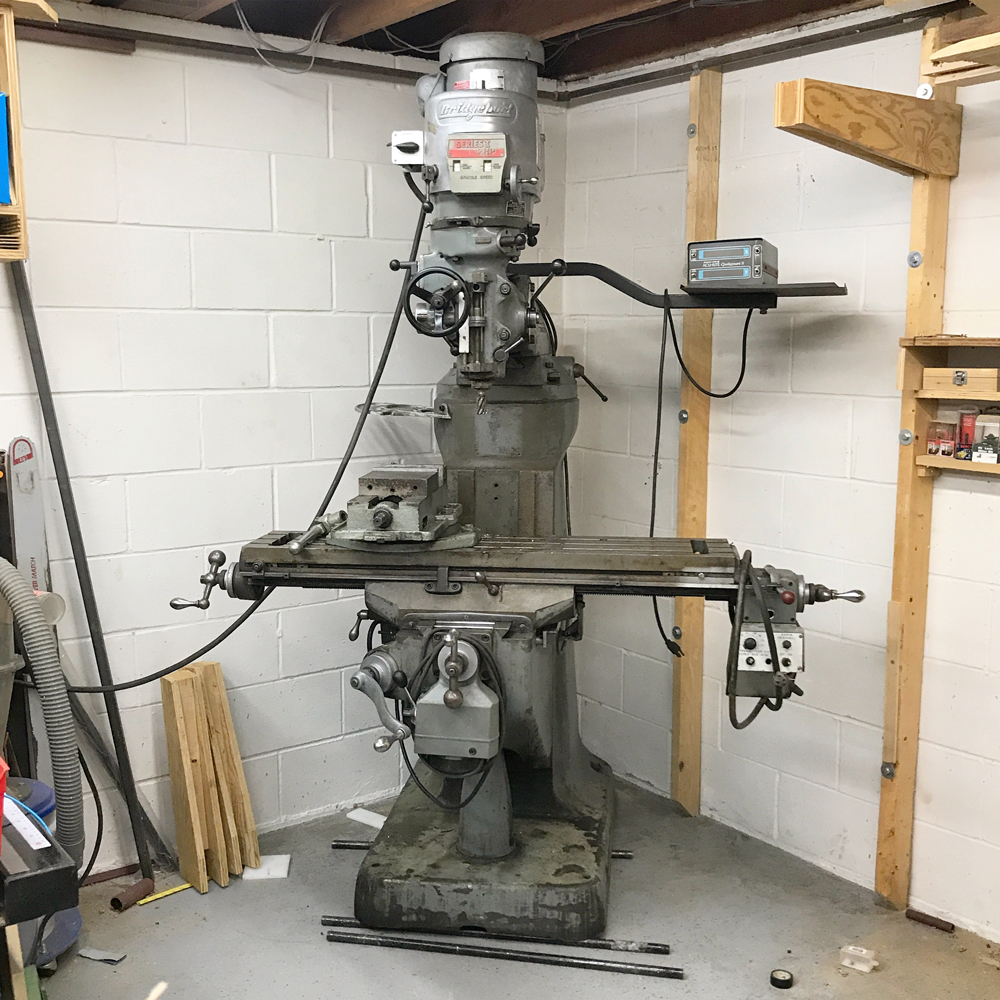 I cleared out a spot in the corner of my shop behind my table saw for the mill.  I think this spot will work out pretty well as I should have enough space around the machine to make working on it easy.  It also should work out that if I store the mill with the table lowered fully, it should be lower than the top of my tablesaw so I wont have any issues with the mill getting in the way when making longer rips on the saw and it might actually be able to serve as an infeed support.  I’m also thinking I may want to make a mobile base for the mill.  Something with casters and leveling feet so when it’s parked it will be on the feet but if I want to move it, say away from the wall, I can retract the feet so the mill is on casters and easily pull it out of the corner.  Just some initial thoughts. 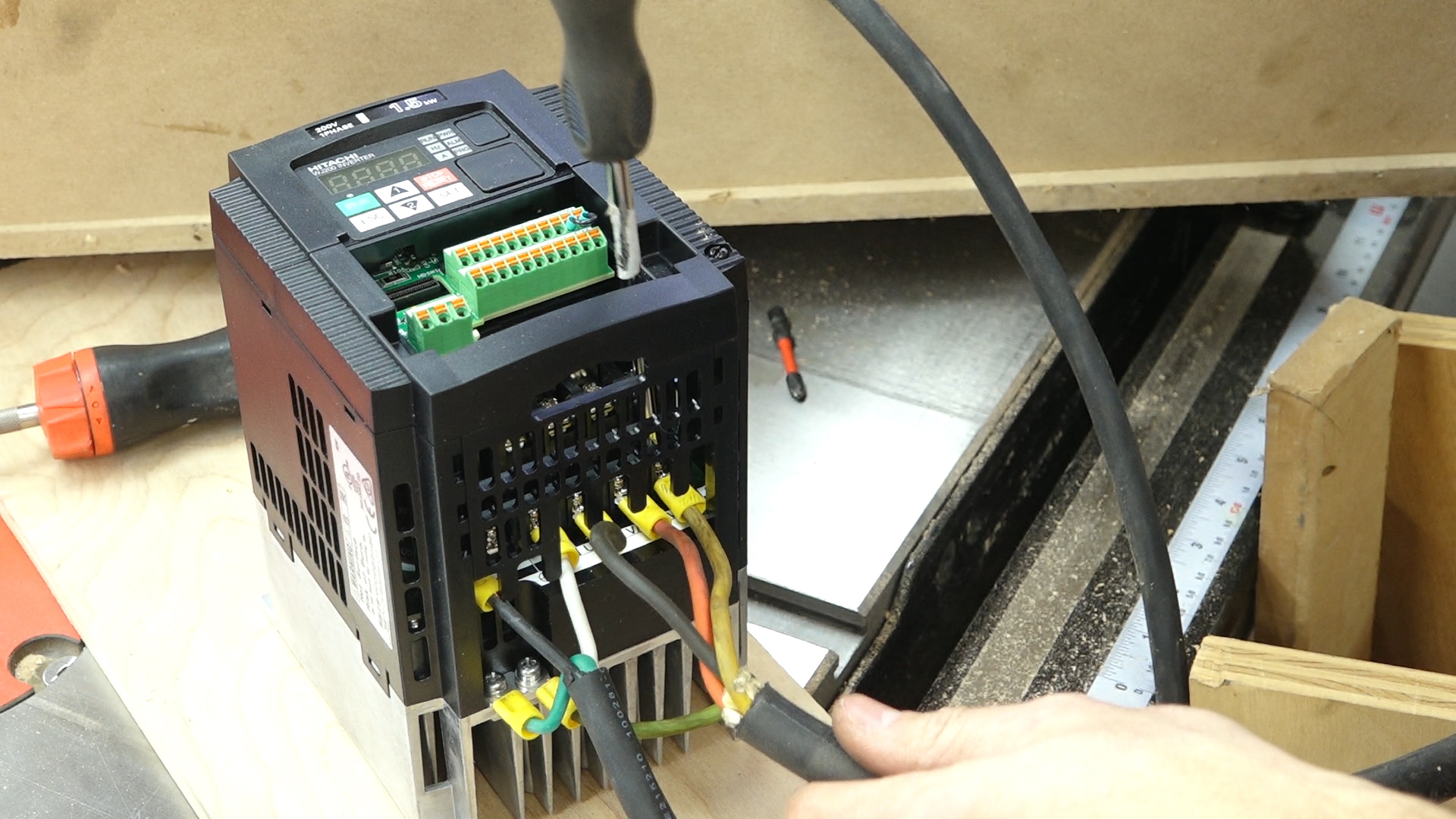 I’m using a vfd to provide 3 phase power to the motor with my single phase service.  I bought a hitachi drive since I’m familiar with those already.  This drive is actually the exact same one that I’m using to control the lift motor on my sawmill.  Since the vfd needs to control the motor directly, I removed the existing drum switch from the circuit so the vfd will be wired directly to the motor.  I verified the wiring on the motor was already set for 220v and reused the old wire which used to go to the switch.  On the vfd, I connected the input lines and the output wires to the motor.  Once the vfd was powered on, I set the basic parameters.  I set the acceleration time to 2 seconds and the deceleration time to zero. 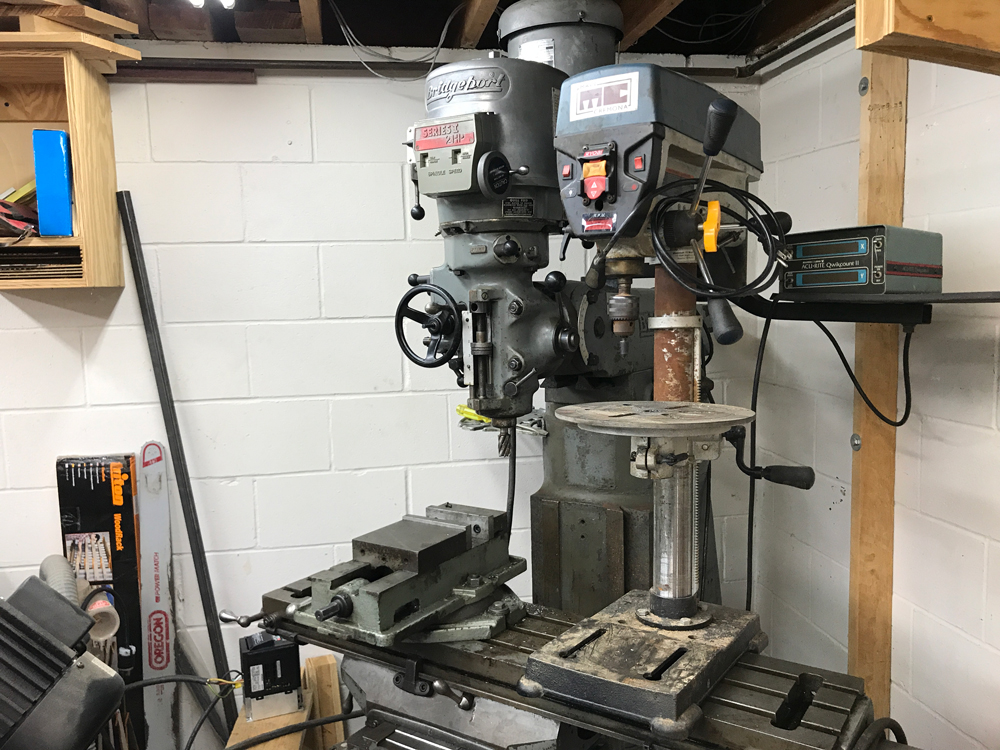 I still have to give the mill a good tune up and cleaning but I’m super excited to learn more about using it and it should be way more fun to use than my old drill press! 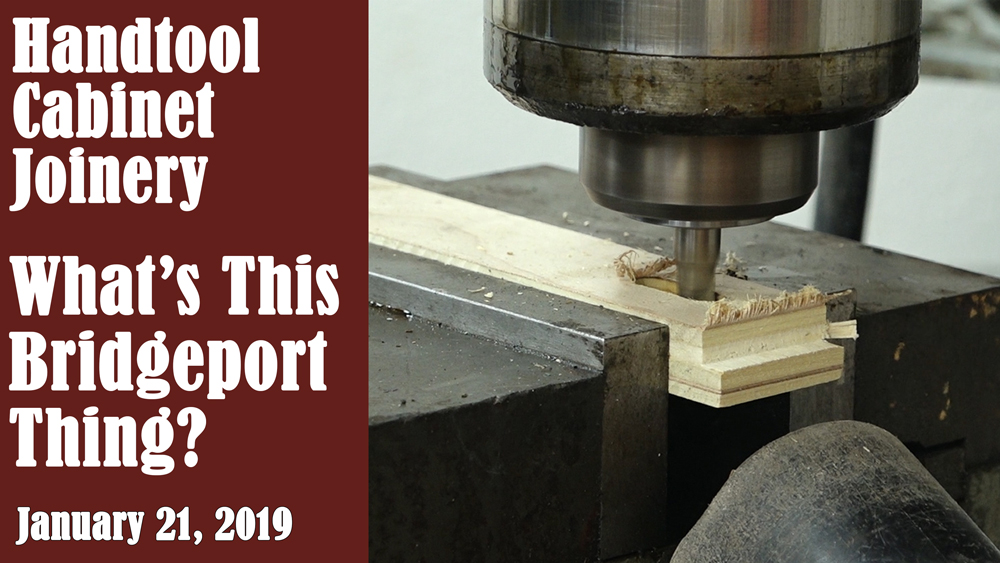 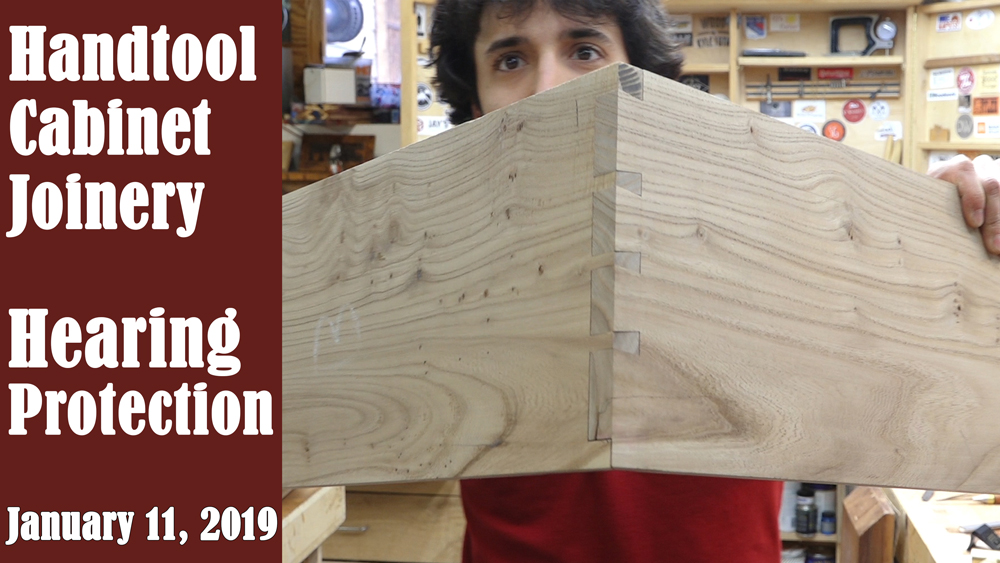